LeBron James & Gisele: The Vogue Cover that Caused All the Controversy 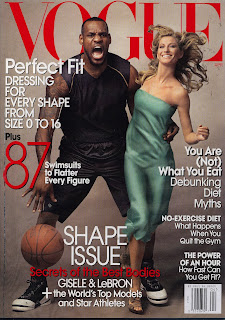 The cover has caused a lot of chatter, particularly online, over whether the shot (taken by famed photographer Annie Liebovitz) perpetuates racial stereotypes.

Some look at the cover and don't think much of it, that it's an interesting shot of two of the world's most recognizable people.

Others, however, see it as the embodiment of racial and sexual stereotypes, that it's a depiction of an aggressive, black man in a King Kong-like pose, embracing a white woman, a Fay Wray-like "damsel in distress."